Tiffany Haddish Learns Hebrew or How To Get More Hebrew Into Your Life
Posted on 12/04/2019 by Rivkah Lambert Adler in Israel
Turns out, comedian, actress and writer Tiffany Haddish has a Jewish father. In a recent interview on the Jimmy Fallon show, she discussed how she found out about her connection to Judaism.

As a teenager, her grandmother told her about her background, but she didn’t initially believe it. Later, she started working as an energy producer on the Bar and Bat Mitzvah circuit. But it wasn’t until she met her father 13 years ago that her connection began to solidify.

“I met my father, finally, when I was 27,” she told Fallon, “and he broke it down to me and said, ‘Yes’. In the country that he’s from, it was kind of illegal to be Jewish and that he fled and there was a war… I believed him because I was so drawn to it. And then I did my 23andMe [DNA genetic testing] and then, you know, boom, Hebrew over here.”

For her 40th birthday on December 3, 2019, she had a Bat Mitzvah with Rabbi Susan Silverman, sister of sister of comedian Sarah Silverman, officiating. 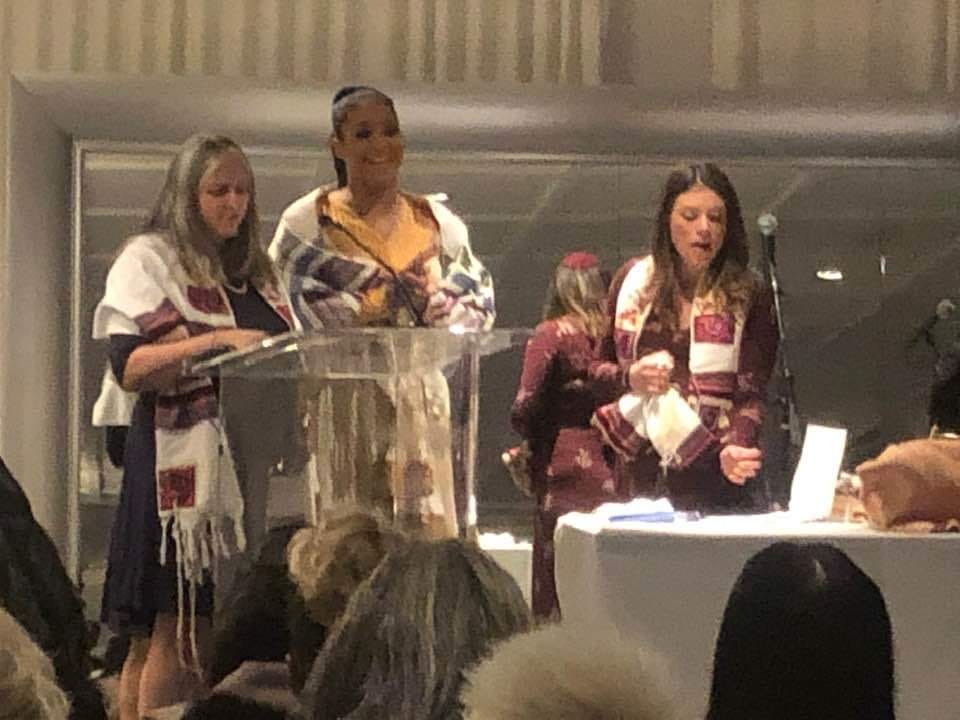 Toward the end of the interview, Fallon handed her a mic and encouraged her to sing Hava Nagila, which she sang for the opening of her new Netflix special Black Mitzvah.
Now I personally think Tiffany Haddish is a talented woman, and I appreciate that she took time to learn about and connect to her Jewish heritage.

But it has to be said.

She does not seem to know the real words to Hava Nagila.

So, as a public service, I’m presenting the actual lyrics here, in transliteration and in English translation.

Let us rejoice, let us rejoice.
Let us rejoice and be glad.
Let us sing, let us sing.
Let us sing and be glad.
Wake up, wake up brothers.
Wake up brothers with a joyful heart.
But that’s not my story at all.
I didn’t learn the Hebrew Alef-Bet until I was in my 30s. And despite a history of other academic success and thousands of hours of adult Hebrew classes, working independently with cassette tapes (eventually transitioning to digital files) and Hebrew apps, mastering Hebrew has proven to be a perpetually elusive goal for me.
Nevertheless, every bit of Hebrew I acquire is precious. And it will probably be a lot easier for you than it has been for me.
So here are a few tips for getting more Hebrew into your life.
1) Most of what I have learned I learned from Pimsleur, a scientifically-proven method that focuses on conversational skills One of Pimsleur’s most interesting findings, one that my own experience supports, is that rote memorization simply doesn’t work. You need to use language in context. Pimsleur isn’t free, but it’s been the most effective system, even more than the five months I spent in an Israeli ulpan.
2) This might surprise you, but the Jewish Agency recommends NOT starting with learning the Hebrew letters, but rather with listening to real spoken Hebrew however you can. Besides, if you’ve been to Hebrew School, you've probably already learned Alef-Bet.
3) Watch Israeli TV with subtitles. Watching Fauda on Netflix is a great place to start.
4) If you’ve mastered Hebrew reading, try reading simple children’s books in Hebrew. The pictures will help you figure out the meaning of some of the words you don’t know.
5) Duolingo offers free Hebrew lessons in five-minute chunks. I use the app on my phone.
Now having sprinkled some of my Hebrew language fairy dust on you, you’ll have to excuse me.
אני צריכה ללכת ללמוד עברית עכשיו
I have to go study some more Hebrew now.
I’m feeling a bit competitive with Tiffany Haddish.
Please note: All opinions expressed in Blog posts and comments on the Jewish Values Online site and through Jewish Values Online are those of the author, and do not necessarily reflect the views, thoughts, beliefs, or position of Jewish Values Online, or those associated with it.

Was the Torah originally written in Hebrew or Aramaic? See answers from Orthodox, Conservative and Reform rabbis here.
If you have a question about Jewish values that you would like to ask rabbis from multiple denominations, click here to enter your question. We will ask rabbis on our panel for answers and post them. You can also search our repository of over 800 questions and answers about Jewish values.

For more great Jewish content, please subscribe in the right-hand column. Once you confirm your subscription, you'll get an email whenever new content is published to the Jewish Values Online blog.