Guess Who’s Building A Sukkah? A JVO Photoblog
Posted on 10/16/2019 by Rivkah Lambert Adler in Holidays
NOTE: Please don't be discouraged by the image formatting in this post. The content has the potential to completely change your paradigm about Sukkot.


On erev Sukkot, the Jerusalem Post’s lead editorial referred to Sukkot as “probably one of the least celebrated holidays by Jews.”

After the first day of Sukkot ended in Israel, my Facebook feed, Messenger app and WhatsApp notifications were filled with pictures of sukkot from all over the world. Ironically, the sukkot I was seeing were not built or used by Jews, but rather by people from the Nations, mostly current and former Christians, who relate to Sukkot as one of the major Biblical feast days.
There’s a verse in the Book of Zechariah that speaks of a time in the future, during the Final Redemption, when the Third Temple will be rebuilt in Jerusalem, that the Nations who survive the War of Gog and Magog will be summoned to Jerusalem to worship the God of Israel and to celebrate Sukkot.

And it will come to pass that everyone left of the nations who came up against Jerusalem will go up from year to year to prostrate himself to the King, the Lord of Hosts, and to celebrate the holiday of Sukkot. Zechariah 14:16

If you live outside of Israel, you may be unaware that Sukkot is a major tourist season for Biblically literate non-Jews. They travel here, in the tens of thousands, during Sukkot.

You may be equally unaware that, even historically, there is a universal dimension to the holiday of Sukkot. In the times of the Holy Temple for example, a total of 70 bulls were offered over the holiday of Sukkot. Symbolically, they represented the 70 nations and the offerings were meant to serve as an atonement for their sins and to ensure that the nations received the rain necessary for a healthy, agriculturally-based economy. 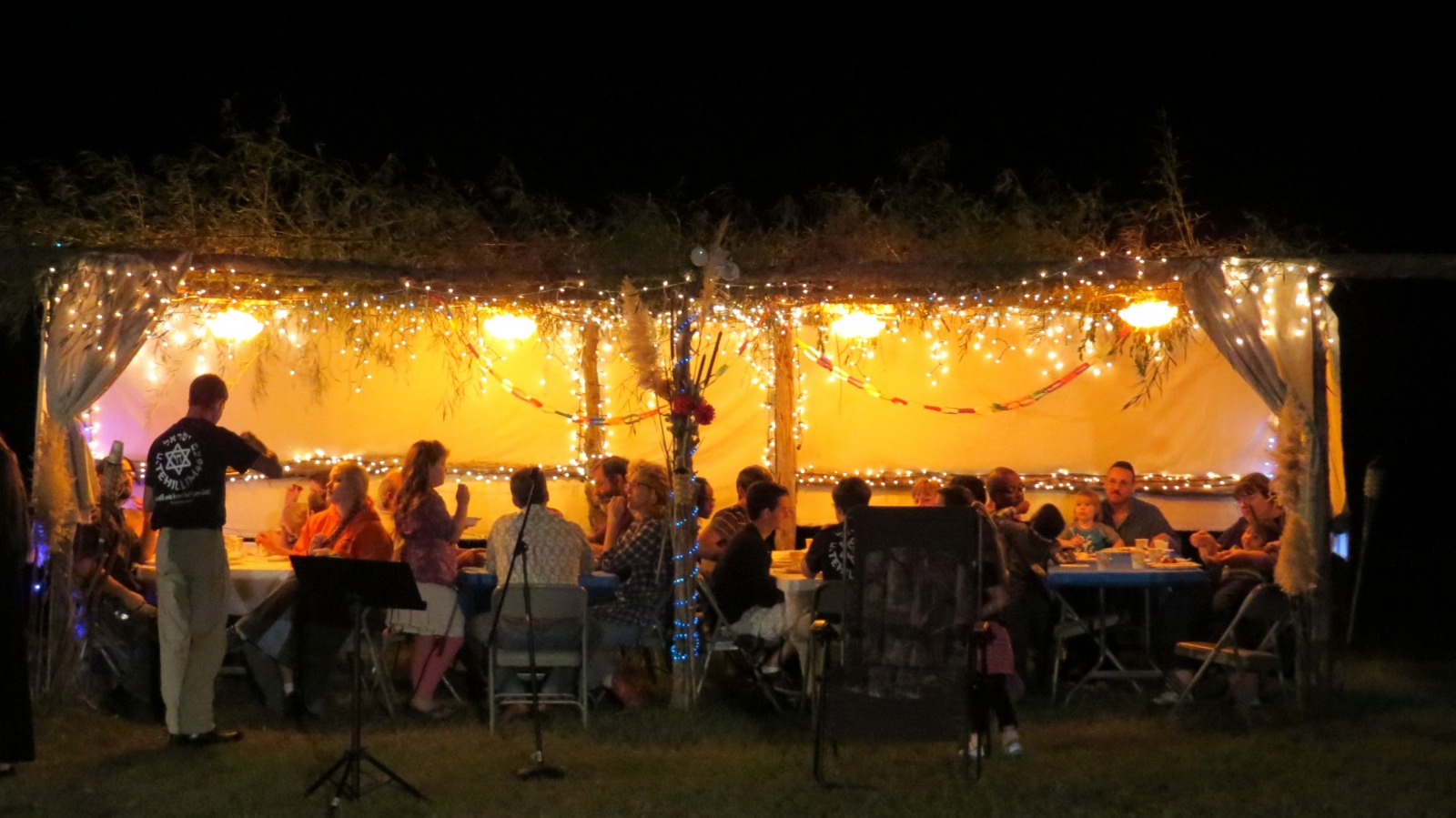 Given this background, there are non-Jews all over the world who erect and spend time in their homemade sukkot each year during the week-long holiday of Sukkot. I asked a few of my non-Jewish friends if I could share pictures of their sukkot with you, to help you become aware of how widespread this practice actually is.
This sukkah, built by Steve Wearp and family, is in Texas. Referring to another verse in Zechariah, Wearp explained why his family erects a sukkah each year. “We celebrate, share and teach about the Sukkot with friends and neighbors! Our family has been building a Sukkah for close to 25 years now. We also believe that we were slaves to the worlds system and its lies, and have been called out of our own ‘Egypt’ to serve the God of Israel.  We too are waiting for the day when Messiah will rule and reign from Jerusalem and all nations will be called up to worship....  I plan to be there first!”
The Wearp family runs Blessed Buy Israel, ancompany they founded in 2017 with the goal of "giving people around the world a way to stand with the Jewish people and combat the rise of anti-Semitism."
Linda and Jim McKenzie are Christians from North Carolina who have been living and working in Jerusalem for the past nine years. Here’s their sukkah this year. Speaking about their motivation, Linda said, “It’s purely Biblical on our part.” She sees herself as “a non-Jew who chooses to be a part of the Creator’s family.” 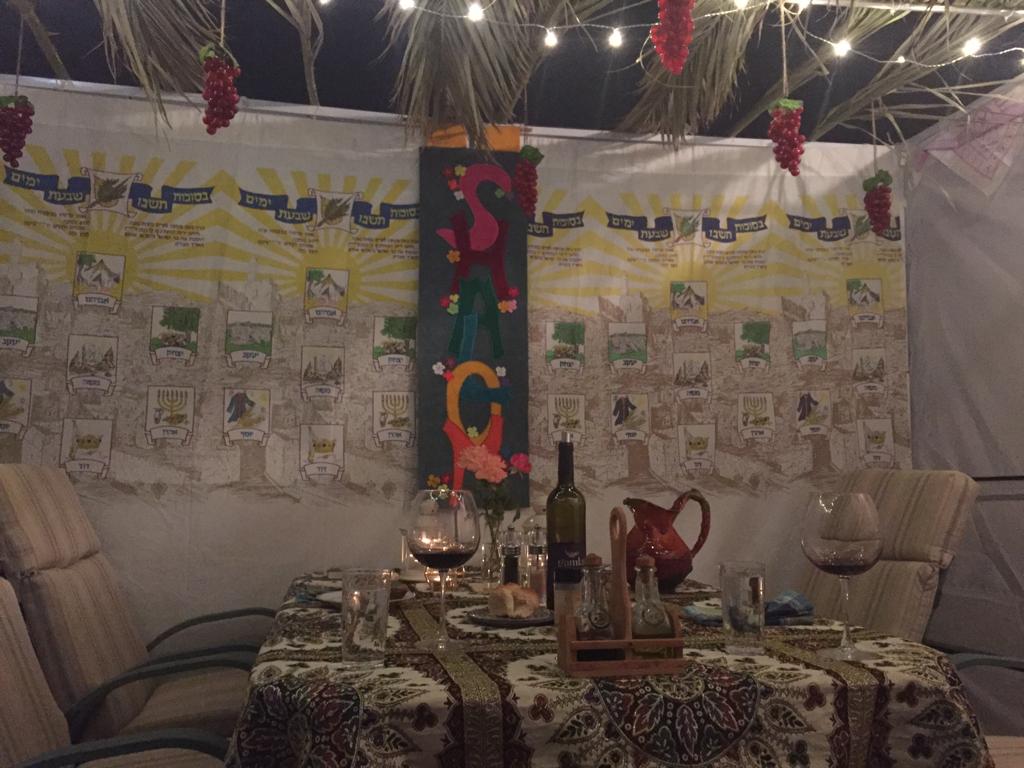 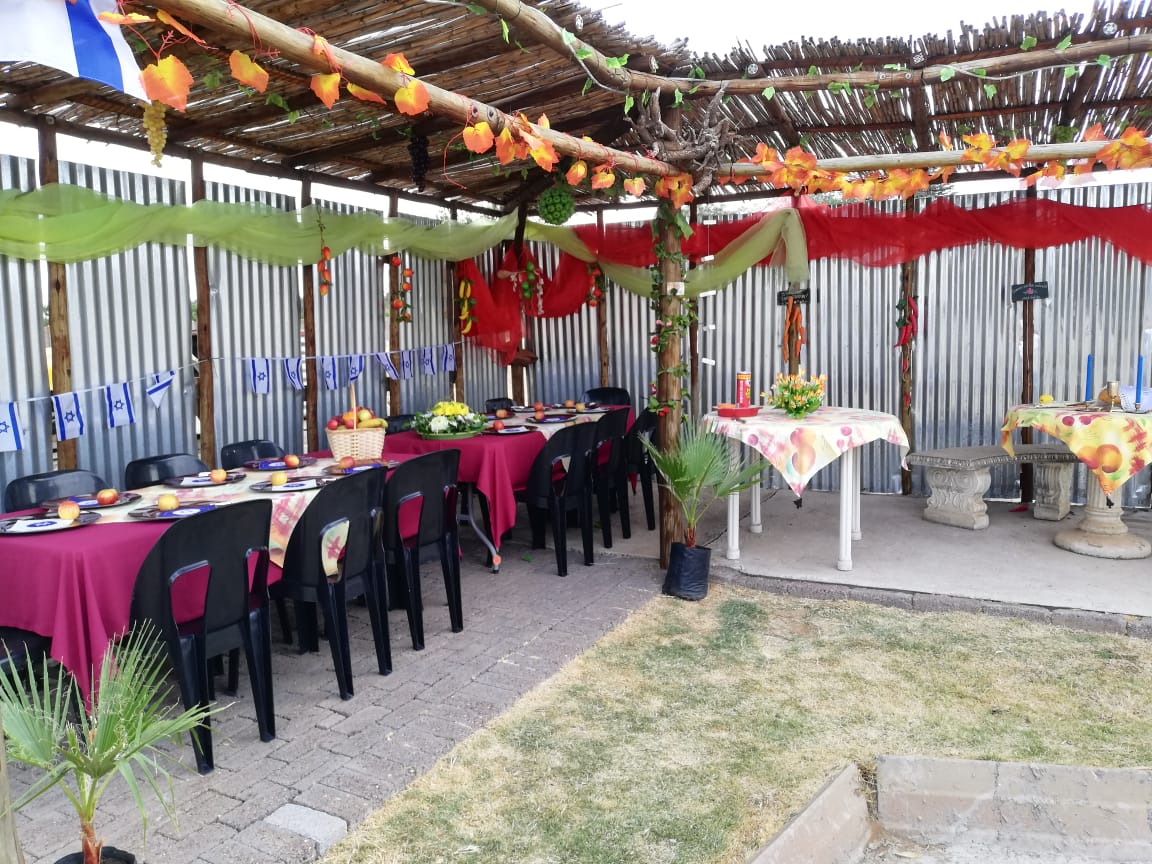 oshoff is part of a community of non-Jews in South Africa that celebrates many holidays on the Hebrew calendar. Rita noted that, “The sukkah here and now is all about the temporary but it serves a purpose of permanency. Something to yearn for, an expectancy for the Olam Haba (World to Come), as we sit in the sukkah, enjoy the shalom, happiness, friendship and family around a table where we eat together in a spirit of unity with all Yisrael over the world.”
This is Courtney Rebovich’s 8th family sukkah. The family lives in South Carolina and describe their connection to Sukkot in this way: “W 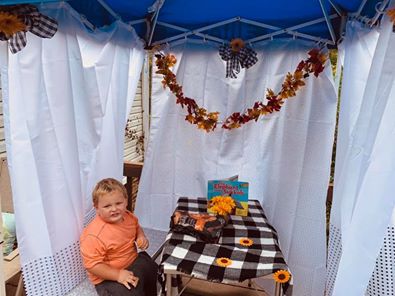 e celebrate because we try to walk out ‘Bible things Bible ways’. We abandoned the holidays of the church/world and traded up for His. Hashem says they are His feasts and in Zechariah it says the world will keep in the future. We figure He and His word never changed, and we love Him and want to walk in His ways-such blessing in doing so.” 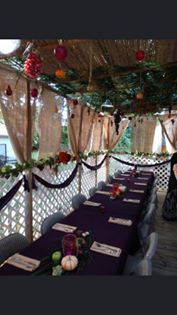 Beth O’Brien from Northern Florida spoke to me of the joy she feels after 14 years of sitting in her community’s sukkah. Why do they build a sukkah if they are not Jews? “Because G_D tells us to! There’s no place more peace-filled than a sukkah.
“To me it’s like every girl’s dream...to decorate and enjoy the cutest little house ever, with friends and family. Fill it with good food, singing, Torah study and lots of laughter...it’s truly a delight.

"I find so much peace in it that when taking my blood pressure at the Dr.s office, I close my eyes and imagine myself sitting in the sukkah. It works every time!”

Zac Waller from HaYovel, a US-based organization that brings Christian volunteers to Israel to help Jewish farmers harvest grapes and olives, sent me this image of their community sukkah which supplements the private one he and his family use on Har Bracha in the north of Israel. 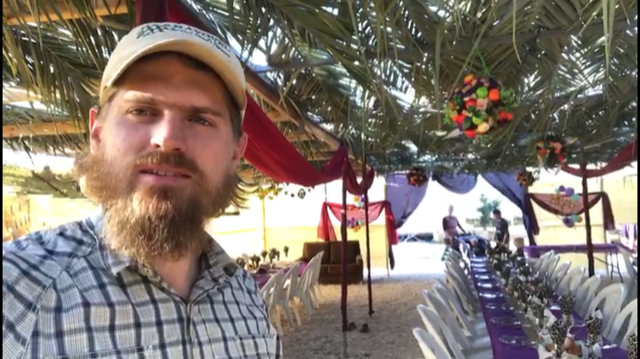 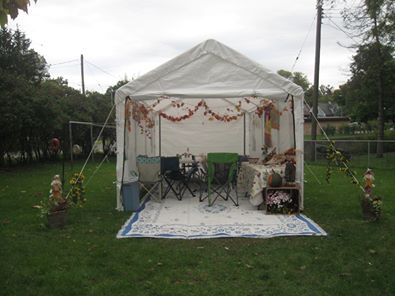 igan is celebrating her 19th Sukkot in this sukkah (left). 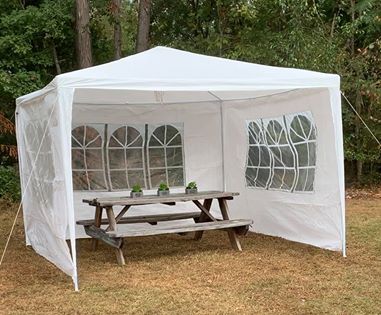 Shelby Jean Riddle-Mason from South Carolina told me that her non-Jewish family joined them in their sukkah (right) this year “for reading and prayers and teaching on the lulav.”
Perhaps the most exotic non-Jewish sukkah I saw this year was the one erected by a community of Noahides in Pakistan. 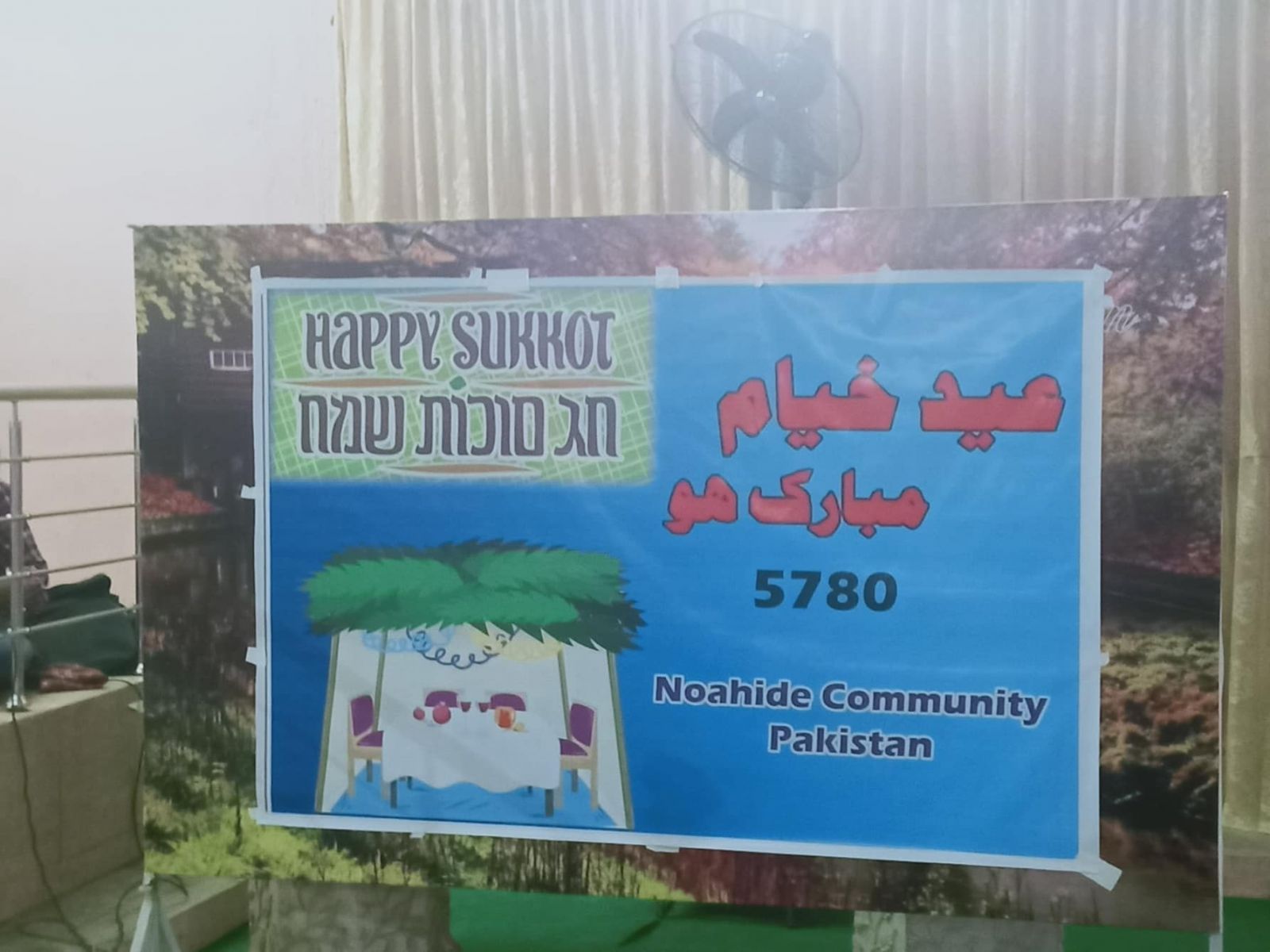 Building a sukkah in Pakistan, where 98% of the population is Muslim, is a profound satement of faith in the God is Israel and His word.

If you’ve never seen or heard about a non-Jewish sukkah before, I hope this has opened your eyes to the growing worldwide phenomenon of non-Jews returning, gradually and in stages, to the Biblical practices of our Torah.
Please note: All opinions expressed in Blog posts and comments on the Jewish Values Online site and through Jewish Values Online are those of the author, and do not necessarily reflect the views, thoughts, beliefs, or position of Jewish Values Online, or those associated with it.

What are we actually celerbrating on Sukkot? See answers from Orthodox, Conservative and Reform rabbis here.
If you have a question about Jewish values that you would like to ask rabbis from multiple denominations, click here to enter your question. We will ask rabbis on our panel for answers and post them. You can also search our repository of over 800 questions and answers about Jewish values.

For more great Jewish content, please subscribe in the right-hand column. Once you confirm your subscription, you'll get an email whenever new content is published to the Jewish Values Online blog.